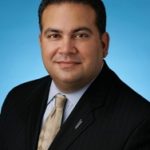 What is your title at City National Private Bank and how long have you been there?

I am the Senior Vice President and I have been at City National for 12 years.

Which Movie Genre best describes you? Describe yourself with a movie title.

I am a movie buff and enjoy all genres, but I would describe myself as a Musical Comedy. Life is too full of drama and suspense and I would rather laugh and make other people laugh. I think for many of us, music truly impacts my mood and stimulates memories. To describe myself with a movie title produced on my life, I might call it “Diary of a Middle-Aged Man Who Never Grew up in G Flat”. 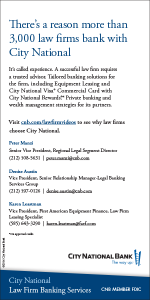 Name an actor you admire and why.

While I appreciate the work of great actors & actresses (especially the Brits), I can’t say that I actually admire any based on their thespian talents. I do, however, admire performers who use their fame and wealth for charitable works. Paul Newman & Joanne Woodward come to mind.

If you could be any fictional character or possess any super powers, who/what would that be and why?

I collected comic books when I was a kid and enjoy the big screen superhero movies. I suppose if I had to choose a single superpower it would be to fly. When you look at photos of the Earth from high above, everything seems at peace. At minimum, I would avoid the security lines at JFK airport.

What songs are included on the soundtrack of your life?

Generally, I like driving to Rock ‘n Roll beats, lyrics that touch my heart or songs that evoke good memories. Like a movie soundtrack, there are different songs for different aspects of my life: waking up to ‘Good Morning Starshine’ from the musical ‘Hair’, driving to something rocking like ‘Living After Midnight’ by Judas Priest, exercising to a drum solo by Neil Peart of Rush. Chilling out to ‘Round About Midnight’ by Miles Davis. The Beatles classic ‘In My Life’ when I’m feeling nostalgic. In times of sadness, uplifting inspirational songs like ‘The Prayer’ by Celine Dion (my wife Lucinda does a beautiful rendition). After a long day at work, walking in the door to Billy Joel’s ‘You’re My Home’ and dancing with my wife to anything by Barry White.

Finish the sentence: If I were not a Private Banker of City National Bank, I would be…:

Please, tell a little secret, skill or tidbit about you most people don’t know.

Well, it won’t be a secret anymore! Seriously, I am a Catholic Eucharistic Minister. (Yes, even sinners like me can serve).

Why have you been a supporting actor for ALA?

I have been a Supporting Actor for ALA because “I can’t get the Leading Role.”